Thursday night we headed back to the ballpark after a few days at the beach.  The Sugar Land Skeeters were in town for the final time this season.  They were in the news this week with the addition of Roger Clemens.  Matt Hagen was the first player out and he came out early.  He began playing catch with us for about 10 minutes before his teammates came out.  He is one of the many really nice guys in the league and it will be cool to see him on ESPN tonight for Roger Clemens start.  After playing catch with Matt, we were able to get quite a few autographs of the Skeeters that we had.  It was also good to see former Barnstormers Iggy Suarez, Vic Gutierrez, and Octavio Martinez.  As for the game, the Barnstormers won 8-0 behind a complete game shutout by 40 year old John Halama.  Great game John...it was awesome to see! All in all it was a great night back at the ballpark. 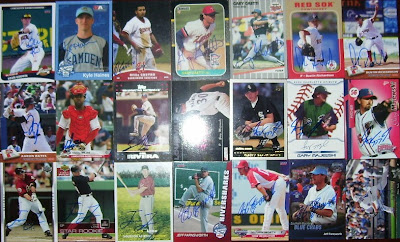