After doing a little fishing, swimming, and mini gold back at the campground, we headed back to the ball games on Friday for some great baseball!  On the way, we stopped at a gas station to get some cardboard so we could slide down the hill at Lamade stadium.

Our first stop was the Little League Museum.  It was really cool to see the history of Little League baseball and all the memorabilia from throughout the years. 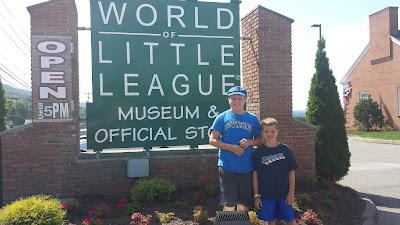 The first game was California vs Great Lakes.  WHAT A GAME!  Everyone likes to see offense, but there is something special about a pitchers dual.  Chad Lorkowski was pitching for Great Lakes and Grant Holman was pitching for California.  Both pitchers were on and at the end of regulation Holman had a no hitter and Lorkowski had a 1 hitter.  Extra innings were needed but Chad was out of pitches so Great Lakes had to go to the bullpen.  California got 3 runs in the top of the 7th and Grant Holman held Great Lakes hitless in the bottom of the 7th to throw the first extra inning no hitter in LLWS since 1979. It was awesome to witness!


We headed over to Volunteer stadium to watch Japan and the Czech Republic for the next game.  On the way over, we ran into Orel Hershiser who was there calling the games with ESPN.  He signed a few autographs for us and took a picture with me.  Japan is always tough but I was cheering for Czech Republic after getting to meet some of the guys.  The day before when signing autographs, Daniel Stoudek shook my hand and thanked me for being a fan.  In the 2nd inning he went deep for his first hit in the LLWS.  Japan went on to win the game 7-3 but it is always fun cheering for guys especially after you meet them and get to talk to them.

As we were heading home, Nomar Garciaparra was at the ESPN stage so we were able to stop and get some autographs on some cards.  All in all it was a great day of baseball and a great time in our first trip to Williamsport.  Autograph totals from the trip will be posted tomorrow.