Friday was a great day at the National Alopecia Areata Foundation conference.  We were grouped by states and had over 600 people with 200 meetings scheduled for the day.  There were 9 people in our group and it was great to make some new friends.  There were 4 people in our group with alopecia areata.  Maureen McGettigan led our group and she has had alopecia areata for over 30 years.  Kylie Clowney is 17 and has had alopecia areata since the age of 2.  Mackenzie Rosenberger is 12 and has only had it for a year.  We were also joined by my dad, Kylie's mom, and Mackenzie's parents and sister Carsen.

We had 5 meetings scheduled for the day and got to meet with our state representatives and congresspeople. With the congressional session ending Thursday we were meeting with the aids of Senator Bob Casey, Congresswoman Allyson Schwartz, Congressman Jason Altmire, Congressman Lou Barletta, and Congressman Mike Fitzpatrick.  Marureen did the introduction and explained alopecia areata and then Kylie, Mckenzie, and I all told our stories about what life has been like for us dealing with alopecia areata.  Maureen finished it by asking them to please consider voting on some bills that support funding for research to find a cure for alopecia areata.  Kylie's uncle Nate works in the Senate offices and was able to meet us and have lunch with us.


Our last meeting was with Congressman Mike Fitzpatrick.  Unlike the others, he was still around.  In addition to his Legislative Assistant, Katie, he invited us into his office and talked to us.  At 3:00 on a Friday, it was really nice that he took time to talk to each of us and get to know us personally.  At the end he posed for pictures with us and I got him to sign one of his cards for me.

Overall we did lots of walking, met new friends, saw some cool parts of Capitol Hill, and helped make a difference for those of us dealing with alopecia areata. 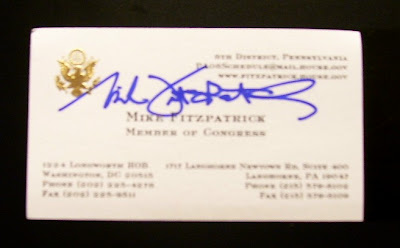