Scott Patterson is one of the original Barnstormers. He was the starting pitcher in the first ever game at Clipper Magazine Stadium in 2005. After being with the Barnstormers for a couple of seasons, he was the first Barnstormer to make it to the "Show" when he made his major league debut for the Yankees in 2008. He has since pitched for the Padres, back to the Barnstormers, and now with the Tacoma Rainiers...AAA affiliate of the Seattle Mariners. After finding out what we were doing by one of our friends, Scott sent us a few of his 2011 Tacoma Rainiers baseball cards. Thanks Scott for the cards and Olivia for making the connection! 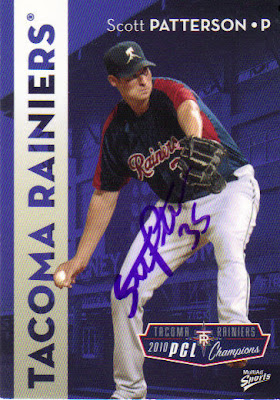