My dad and grandpa sell cars together and recently had a pretty cool customer. After they were talking to him they found out that he was a professional baseball player in the Astros organization. Mark Jones was drafted in 2009 out of our school district, Manheim Township. We love to read about the local guys that get drafted and are playing professional baseball...and there are quite a few. After Mark picked up his car, he brought in a card and signed it. That was really cool. Thanks Mark!

I am going to work on getting some of the other local guys cards signed during the off season as well. I better hurry up though...pitchers and catchers report soon! (scanner is not working so it is a blurry pic...will have fixed soon) 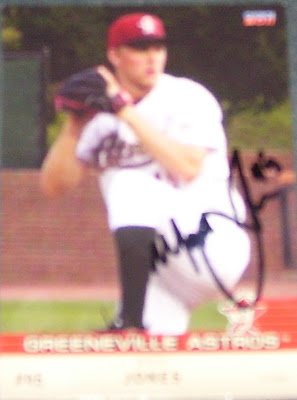