This past weekend the Camden Riversharks came to town to play the Barnstormers. It was exciting for us as Phillies fans to see Pedro Feliz get to play in Lancaster and we also got to see our friends and former Barnstormers Lloyd Turner and Juan Francia. Saturday night we got there early and Gavin got several cards autographed by the Riversharks. I was working on a Riversharks team signed ball so we ended up doing pretty well that night. Monday night we went back...different story. First, dad was working until 8 so he was going to meet us there. Mom took us and we got there during the National Anthem! That is WAAAAY to late! We didn't get any autographs before the game for the first time all season...maybe ever! That's OK, we can always get them to sign after the game. Little did we know that 2 outs into the first inning the skies opened up for a 56 minute rain delay. Once the game finally did start, the Barnstormers bats opened up. It was almost 10:00 and only in the 4th inning. That's right, we did it again. We left about 10:40 in the bottom of the sixth inning. Not only did we get there late, but we left early...NOOOOO! So we were going to leave with a SHUTOUT for the first time EVER! 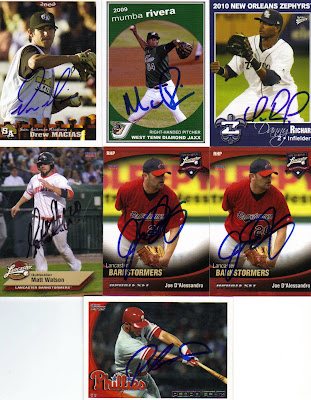 But...we had a big spike in fans of our facebook page over the weekend and one of them had a surprise for us. Bob Ford is the Business development director for the Barnstormers and when he saw what we were doing, he got Pedro Feliz to sign a ball for us and had it in his office. Thanks to Bob we were not shut out. 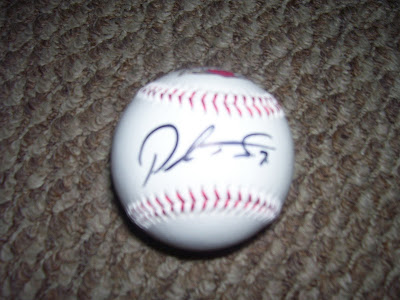