One of the great things about going to baseball games is meeting new people. Last Friday when we were at the Bowie Baysox game we had the opportunity to meet several new people. One is Brandan Kaiser. He is the marketing director for the Baysox and after talking to him for a few minutes, we found out he was from Lancaster! He even went to school at Lancaster Catholic which is right in our backyard...small world.

During the game, we met Aaron and Meg Amor who are from New Zealand. They were at the Orioles-Yankees game the night before and this was only their 2nd baseball game ever. In New Zealand they play cricket. Aaron had a cricket ball with him and was explaining the game to us (baseball is much simpler). He could have continued playing cricket, but they decided to take a tour of the US by motor home. They are going to be visiting every state and doing something historical or famous for that state. I would love that! Meg is an author and therapist. She is also an excellent photographer as evidenced by her pictures of their trip so far. We'll have fun keeping up with their journey as they will ours.

Aaron really wanted to catch a ball but it never happened. After the game the usher gave Gavin and I each a broken bat from the game so I let Aaron have mine. Something memorable from the great American past time. 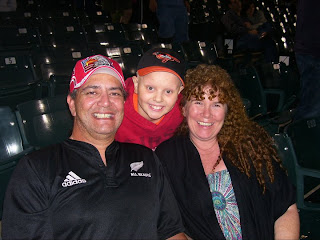