One At Bat ... Adam Greenberg

In April of 2008 we attended a Barnstormers game with our family to celebrate Gavin's 3rd birthday.  They were playing the Bridgeport Bluefish.  That night was the first night we met Adam Greenberg.  We knew of Adam's story with the Cubs because of my friend Matt Murton and had followed his comeback.  We got to know him and watched him play whenever the team would come to Lancaster or York and always cheered for him to make a comeback to Major League Baseball. Adam signed many baseballs, programs, cards, and photos for us and even took us into the clubhouse to hang out. He even wore the NAAF baseball band during a few games last season. His story had been featured on ESPN's Outside the Lines a couple of times and we would always watch. 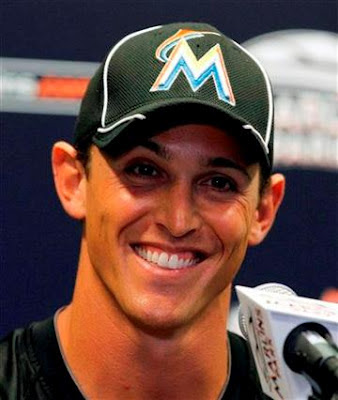 In the spring of 2012, Matt Liston made a campaign to try to get Adam One At Bat at in the big leagues.    The Miami Marlins made a classy move and signed Adam to a 1 day contract with the promise to get him his One At Bat on Tuesday night.  We were so excited for Adam and couldn't wait to watch.  We were hoping that he would get to play the whole game, but Ozzie Guillen said he would just use him as a pinch hitter.  He had a tough draw in 20 game winner and Cy Young candidate...knuckleballer RA Dickey.  When Adam came to the plate he received a standing ovation from the Marlins crowd.  The at bat didn't last long as Dickey struck him out on 3 pitches but we couldn't help but smile as Adam walked off the field to another standing ovation from the crowd. 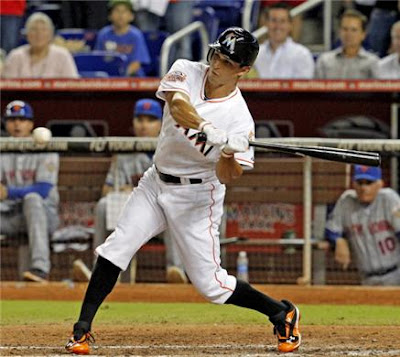 His journey made such an impact that Topps announced that Adam will be featured in their 2013 set and have his very own Marlins card.  We can't wait to ad a few of these to our collection!

It made us proud to have gotten to know Adam over the last 4 years.  Thanks Adam for the many pictures, autographs, and good times at the ballpark.  We hope to see you again in 2013 with the same drive to get back to the bigs.