Last Wednesday night would be the final baseball game for us this season.  The Barnstormers were taking on the Long Island Ducks for the Atlantic League Championship.  After a record setting season, the Barnstormers were heavy favorites.  The Game 1 atmosphere was awesome! With the Barnstormers hosting games 1 and 2, we knew they would have to win the best of 5 series on the road.

We only had a few autographs left to get on our 2012 team signed ball and our Barnstormers All Star team photo so we worked on those as well as a couple of photo cards of former Barnstormers who are playing for the Ducks now.  We got our autographs and settled in for a great game.


Dwayne Pollok was our game 1 starter and he was ready to go.  They had several members of the 2006 Championship team there to throw out first pitches too.  I was 5 last time they won it all and Gavin was 18 months old so we were ready for a championship.  The Barnstormers won game 1 and lost game 2 at home.  After taking game 3 in Long Island, the Barnstormers bats went cold and lost games 4 and 5.  Game 5 was a heart breaker!  After fighting back in the top of the 9th to tie it, Dan Lyons put a perfect bunt down the 3rd base line to score the runner from 3rd and win the Championship for the Ducks.  We were gathered around the computer watching live and couldn't believe it.  Dad was going to let us go meet the bus even though it would be the middle of the night.  After the heartbreaking loss he said it was probably best not to.  It was sad because we didn't get to say goodbye to the guys but hopefully we'll see a lot of them back next season.

Thanks to the Barnstormers for a special year.  I will be going over some of the highlights in the next week.  Congratulations to the Long Island Ducks for a GREAT series and winning the championship. 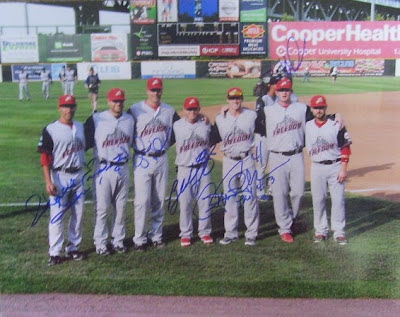 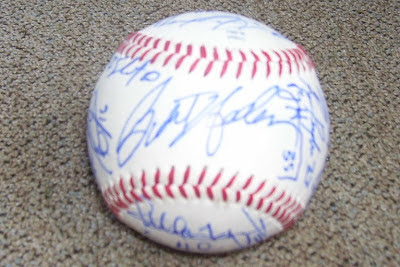