Last Saturday we were able to take in our first indoor football game.  We went to see the Harrisburg Stampede take on the Virginia Badgers.  They play in the Professional Indoor Football League.  It was a test they were doing by playing the game in York looking at possible expansion.  The one downfall was they played in the ice rink and we didn't think about it being cold so we didn't pack sweatshirts.


We ended up leaving a little into the 4th quarter because we were freezing so we really didn't get the chance to try to get autographs after the game.  Before the game we were able to get Marques Colston to sign for us.  He is a co owner of the team and we were also able to meet Mr. Coble.  He is the other owner and remembered us from our letter.  He talked to us for several minutes and was very supportive of what we are doing.  We are looking forward to going to more Stampede games in the future! 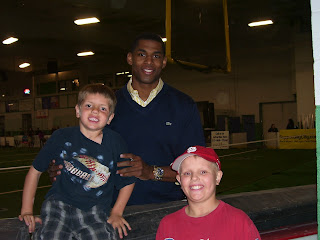