One of the best things about going to baseball parks is getting to know people.  We've gotten to know a few people from Long Island and one of them is Emil Coccaro.  Emil is the clubhouse manager for the  Long Island Ducks and battled alopecia as a boy. Earlier in the summer, he brought us some autographed balls and told us he was working on a special project that wouldn't be done until the end of the season.  You can check out that post here...

Well, that special project has arrived!

Emil sent us a Kraig Binick game used jersey from the 2012 championship season.  There is a #8 patch on the side in honor of Hall of Famer and former Ducks manager, Gary Carter, and the front of the jersey is autographed by the 2013 Long Island Ducks championship team.  WOW!   When he told us he was working on a project, we had no idea that the Ducks would end up winning their 2nd championship in a row!  He joked in the letter about it being from Long Island, but WE LOVE IT and it will look great hanging in our room. 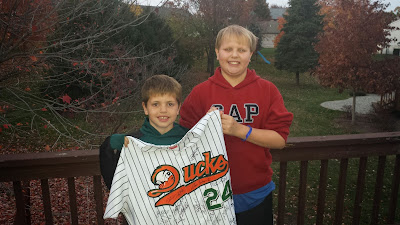 Thanks Emil!  Can't wait to see you next year!