Game 17: War of the Roses Finale

After Gavin and I got back from NY, we were going to catch 1 more game before school started.  Sunday afternoon we went to the final War of the Roses game between the Lancaster Barnstormers and York Revolution.  We knew this would be the last time we'd see York, so I went to get the Revolution and Gavin stayed to get some of the Barnstormers 2013 card set signed.


As Gavin was getting Brodie Downs to sign his card, Brodie asked Gavin to sign the inside bill of his hat.  He had other kids sign it too and said how cool it was for the kids to sign.  Here is a great article in our newpaper about Brodie.


York won the season series, but Lancaster took the game today in a 1-0 pitchers dual! A "back to school" cheese steak, a great ball game, and some good autographs...and then home to watch Japan and California in the Little League World Series championship! 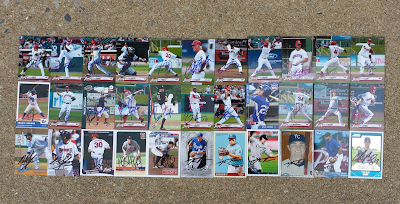