This past weekend the Southern Maryland Blue Crabs were in for a 4 game series against the Barnstormers.  We made it to 2 of the games on Friday and Sunday.  Friday night we worked on getting a special team set that our friend Jeff made for us.  He is a really good photographer and made some of his pictures into card sizes for us.  That was really nice...especially since my book of un-autographed Atlantic League cards was stolen out of our car.  We lost a lot of cards, but at least they were not the autographed ones and it was the end of the season.  Since we didn't have any Blue Crabs cards to get signed, we just focused on our new card set of the Barnstormers.

Sunday was fan appreciation day and the final home game of the regular season.  It's hard to believe baseball is winding down.  We took our friends Isaac and Abe again and had lots of fun with them. They gave away team posters and the players were all out signing them and talking to the fans. The Barnstormers will finish the regular season on the road and then come home to start the Atlantic League playoffs against the York Revolution.  The Blue Crabs lead the other division so we could end up seeing them 1 more time too. The team has come up with a slogan of Get Your Mind Right so we made a sign to help them.  I love playoff baseball! 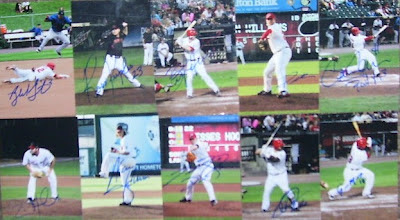